Seth, a friend of mine that I mentioned in a previous post, I’m Afflicted with Wanderlust, who travels all the time and fills me with so much envy; traveled to Myanmar, the former country of Burma, last December. He took some amazing photo’s and had a couple of fundraisers/art shows sharing the beautiful pictures and tales of his travels. He offered one of his friends and me a tour on a recent visit to his office. (he’s a lawyer in his day job, I try not to hold that against him) 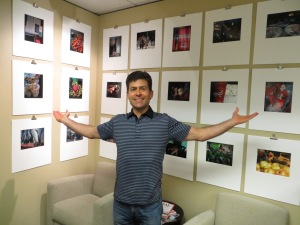 He also wrote a piece in the Daily Journal of Commerce about his trip where he shared some of the history of the country and a few interesting stories and misadventures. Here is an excerpt about a portion of his trip where he decided to rent a moped to head up to a hot spring outside a city he was visiting;

“After a little reflection, I realized that weaving in and out of traffic (semis, buses, other mopeds), armed with a meek little horn and a broken blinker, was proof positive that I don’t value my own life quite enough. When I arrived, thankful to be counted among the living, I planted the kickstand, and that’s when I realized something else, a bit less important than the value of life. I had forgotten a towel.”

And yet he made the best of it when he decided to have a beer instead; a taxi driver found him interesting and wanted to know why he isn’t in the hot springs. Seth tells him that he forgot his towel, and the man hurries off and comes back with a longyi (According to Seth, a traditional cloth wrap worn by everyone other than tourists, replacing pants and similar to a sarong) for him to use to visit the pool.

For some reason this seems to be a typical Seth story, he forgets his towel and a man provides one, he smiles and a lady crosses the street to give him a flower(see below). No wonder he has survived months of travel and had really very little bad things happen to him.

The lovely woman in the picture above is the one from his story that offered him a flower.

“I noticed someone dodging traffic, walking towards me, with purpose. The woman stopped and handed me a bright crimson flower with a short stem. I thanked her as best I could. She didn’t speak any English, and Burmese, the mother tongue, was way beyond my pay grade.

The woman cupped one hand and motioned towards her nose. “Smell it,” she implied, without saying anything. So I did. And I’m glad I listened. The smell was incredible: rich and fragrant, anise and clover.

I carried the flower with me that day and the next, all the way to the airport, where I finally left it, wilting on a window ledge.”

Seth is full of stories from his adventure; including trying some weird goopy “peyote” like substance from a stand and enjoying it, eating mostly street cart food and never getting ill, moped rides, crazy train rides and more. You can see more of Seth’s pictures on his website.

A Few of My Favorite Pictures

I now have another location on my bucket list of places to visit. Do you have a favorite place that you think I should see?